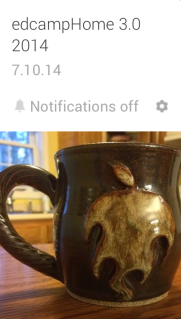 Still riding the high from attending EdCampHOME 3.0.  I lurked during my first one…meaning, I basically followed the conversation via Google on Air.  But this time around, I wanted to participate.  The problem?  I would have to be on video.  Argh!  I hate being on video.  But I had to get out of my comfort zone and just deal with it.

I practiced setting up a Google+ Hangout (with myself – I know how that sounds, but it wasn’t weird…well, it wasn’t too weird anyway) and I played around with the add-ons.  I shifted my laptop around on my desk to figure out the best position so that my face wasn’t in a shadow and so that participants couldn’t see my mess of an office.  But I digress.  And then I decided to add the Lower Third (per @davidtedu).  Much to my surprise, the text was backwards.  Really?!?!  Well, I’m not one to shy away from clicking around so I figured out how flip the screen so that the text was readable, but then to my dismay I discovered that my camera was no longer a mirror of my actions.  It had flipped me too!  Boy, you want to talk about mind games.  I am a visual learner.  I’m very good at spatial everything.  But trying to figure out the mirror/reverse on the camera threw me for a loop.  I left a feeble message in our G+ group and was happy to discover that there were people so willing and able to help.  Two people created visuals for me.  Well, not exactly for me.  But I felt like it was for me.  =)  I totally appreciated it.  A shout out and HUGE thanks to @DAliceMarsh and @2footgiraffe!

When I finally got into the first session, the non-mirrored view of myself was not a problem.  In fact, I didn’t even really see myself because I was always small on the screen.  Thank GOD!  I don’t think I could have concentrated on the conversation at hand if I was face to face with my face really large on the screen.  But it was ridiculous.  I had two laptops and my iPad on my desk and I was trying to follow the feed on Twitter as well as take notes.  Talk about multi-tasking.  It may have looked like (to the participants) that I wasn’t paying attention, but I was.  I totally was.  Copious notes.  =)

The first session was great.  In previous Twitter chats, there was discussion about using students to help deliver PD…so naturally I wanted to learn more.  At the end of the school year, I had a couple of NJHS students create tutorials on how to use Edmodo and MyBigCampus.  I was thinking that I could put those on my class website for next year.  I mean, what better way to learn than from peers?  With little direction, my five students did an awesome job!  And…they earned community service hours for it.  Bonus!  I’m thinking that I can tap that resource to help with PD for this coming school year.  But more importantly, I’m thinking that I could use a few of them to help out at our Staff Development Day in August.  And the wheels are turning…

My second session was almost a bust.  I soooooo wanted to attend the Genius Hour session to hear about how people were implementing GH in their classrooms.  But after about 20 minutes and no help on that end…I saw a tweet from @SLOKevin about there being room in their GHO on hosting/preparing for an EdCamp.  I jumped all over that because that was one of my four votes for this EdCamp anyway.  Though I missed out on the previous 20 minutes, luckily all sessions were recorded so I plan to review the conversation at a later date.  I already set up a GoogleDoc with information on setting up and hosting an EdCamp for our district.  I shared the EdCamp info with our new Director of Technology and another fellow tech-geek.  So hopefully I’ll be able to tweet that our district is finally joining the EdCamp movement.  =)

I see a lot of value in EdCamps.  It’s informal, it’s democratic, it’s collaborative…and boy, is it informative.  What’s not to love about FREE PD with like-minded educators?